A message from Keith Gowling, Chairman of the Villager Bus.

I am pleased to announce that, after four months of suspension due to lock down, we will be able to resume all Villager Bus services from Monday, 3rd August. Because of the continuing need for caution over the spread of the virus, we have carried out a thorough risk assessment of the dangers posed to our drivers and passengers. As a result, we shall have only 50% of normal seating capacity. Unfortunately, we are unable to run extra buses as our driver numbers have been reduced by those who still need to remain isolated. This may cause some passengers to be disappointed but we will make every effort to make extra journeys where possible. Please note also that passengers will be required by law to wear face coverings on the bus.

The Villager Bus has a new website http://www.villagerbus.co.uk. Where you will find further details. 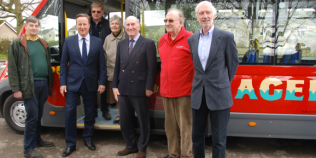 The Villager Bus has been running since the spring of 1982 providing transport services to often isolated Cotswold Villages which have no other public transport. The service was started as a direct result of a government report on the causes of depopulation in rural areas, an issue which is still just as relevant today. In 1982, the service started with just one minibus. Today, the Villager boasts five 16 seater mini coaches offering scheduled services on routes serving many villages and is used by an average of some 200 passengers a week.

In 2004, the Villager received the Queen's Award for Voluntary Service 'for providing extensive, reliable and economical transport for 65 villages in the north Cotswolds'.

The Villager is an established scheduled service operating in parts of Gloucestershire and Oxfordshire. Services run Tuesdays to Fridays from Oddington, via other villages to Witney, Chipping Norton and Stow. Detailed timetables can be found on the Villager website.

For information contact Keith Gowing on 01608 658579. The bus can be hired for private functions by contacting Pauline Jackson 01993 831967. If you are interested in becoming a volunteer driver please contact Keith on the number given above.